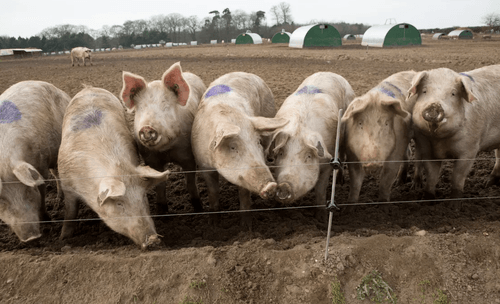 Britain may be entering a prolonged period of crisis now, one that may be on par or even exceeds the emergencies of the late 1970s. Brits face a gasoline shortage because of the lack of truck drivers, dwindling natural gas supplies, and soaring power bills. There’s also been food shortages and panic buying of essential goods that have driven up prices and made the situation much worse.

A more extended crisis is occurring within the country’s food supply chain. The latest figures from the National Pig Association (NPA) warn 120,000 pigs will be culled because of labor shortage.

“We are within a couple of weeks of having to consider a mass cull of animals in this country. We think our backlog is in the region of 100,000 to 120,000 as we stand today. And it is growing by around 12,000 a week. This is happening on pig farms all over the country; they are backed up and running out of space to keep animals.”

“The only option for some will be to cull pigs on-farm, which is something that we have tried our utmost to avoid,” Mutimer said. “Not only would this be an incredible waste of healthy pigs and good pork, but it would also be financially ruinous and incredibly damaging for your supply chains.“

“The problem in the industry has got considerably worse over the last three weeks,” he added.

Last month, slaughterhouses were disrupted by a shortage of carbon dioxide to stun animals created a severe backlog. CO2 is a byproduct of fertilizer, and two major factories that produced the nutrients were shut down due to skyrocketing wholesale natural gas production. The government has since intervened and restarted at least one plant.

The food industry is just one of the many industries experiencing severe disruptions and chaos that could trigger a “winter of discontent” for many Brits.

By Kipp Jones
The Western Journal

A group of international transport organizations issued a chilling warning of the potential collapse of supply chains in the coming months, and they’re asking world leaders to do something to avert what could be a catastrophe.

In an open letter released this week, they spelled out the stakes of continued delays caused by pandemic protocols. They asked the UN, the World Health Organization and anyone else listening to intervene to prevent a “global transport systems collapse.”

“Since the outset of the COVID-19 pandemic, the maritime, road and aviation industries have called loudly and clearly on governments to ensure the free movement of transport workers and to end travel bans and other restrictions that have had an enormously detrimental impact on their wellbeing and safety,” the letter said.

“Transport workers keep the world running and are vital for the free movement of products, including vaccines and PPE, but have been continually failed by governments and taken for granted by their officials,” the experts added, noting that they are responsible for a combined $20 trillion in annual world trade.

“We ask heads of government to urgently take the leadership that is required to bring an end to the fragmented travel rules and restrictions that have severely impacted the global supply chain and put at risk the health and wellbeing of our international transport workforce.”

According to the leaders of the shipping industry, nobody is listening, and a global disaster could be the result.

“We are witnessing unprecedented disruptions and global delays and shortages on essential goods including electronics, food, fuel and medical supplies. Consumer demand is rising and the delays look set to worsen ahead of Christmas and continue into 2022.”

The letter also referred to ships stuck out at sea waiting to be unloaded. We’ve seen some of this in the U.S., as dozens of container ships remain anchored near the Port of Long Beach in the Los Angeles area:

According to international shipping workers, these backlogs should be taken as a sign that something needs to change — and quickly.

The experts warned that things could soon get worse, as many workers are expected to simply quit.

“It is of great concern that we are also seeing shortages of workers and expect more to leave our industries as a result of the poor treatment they have faced during the pandemic, putting the supply chain under greater threat,” their letter warned.

The workers concluded by calling on world leaders to take “meaningful and swift action to resolve this crisis now.”

Read the full article at The Western Journal.

Astrology Forecast – Solar Eclipse in Virgo, Sep 13th – Blessed are the Humble, Theirs is the Earth