ERBN – According to the US FDA’s Vaccines and Related Biological Products Advisory Committee the novel COVID-19 vaccines are not as harmless as the public is being told by their governments, the mainstream media and the alleged ‘experts’ that they have on their shows or who they interview for their newspaper articles.

In fact, the FDA’s Committee, in an October 22, 2020 meeting, agreed that the agency expects 27 adverse reactions to the novel vaccines, including death. On page 17 of their meeting report the Committee lists the following adverse reactions:

But what do these listed adverse reactions mean? Because many people have no idea what all these terms are actually saying.

Guillain-Barré Syndrome: A disorder in which your body’s immune system attacks your nerve system. This may eventually paralyze your whole body.

Acute Disseminated Encephalomyelitis: An inflammation that affects the brain and spinal cord, usually in children. It damages the coating that protects nerve fibers, called myelin. Symptoms may be severe.

Transverse Myelitis: An inflammation of both sides of one section of the spinal cord. This neurological disorder often damages the insulating material covering nerve cell fibers (myelin). Transverse myelitis interrupts the messages that the spinal cord nerves send throughout the body.

Encephalitis: An inflammation of the brain.

Meningitis: An inflammation of the meninges. The meninges are the three membranes that cover the brain and spinal cord.

Convulsions/Seizures: Seizures cause rapid, rhythmic and sometimes violent shaking movements of the body, often with loss of consciousness.

Cataplexy: A sudden loss of voluntary muscle tone. The condition is often associated with narcolepsy.

Myocarditis:  An inflammation of the heart muscle. Symptoms can include shortness of breath, chest pain, decreased ability to exercise and an irregular heartbeat.

Pericarditis: An inflammation of the pericardium (the fibrous sac surrounding the heart). Symptoms typically include sudden onset of sharp chest pain, which may also be felt in the shoulders, neck or back.

Autoimmune Disease: A condition in which your immune system attacks your body because a drug or vaccine that was received contains human cells foreign to your own.

Acute Demyelinating Diseases: Any condition that results in damage to the protective covering (myelin sheath) that surrounds nerve fibers in your brain, optic nerves and spinal cord. This includes multiple sclerosis (when your immune system attacks the myelin sheath or the cells that produce and maintain it), optic neuritis (inflammation of the optic nerve in one or both eyes) and adrenoleukodystrophy/adrenomyeloneuropathy (inherited metabolic disorders).

Thrombocytopenia: A condition in which you have a low blood platelet count.

Venous Thromboembolism: A condition in which a blood clot forms most often in the deep veins of the leg, groin or arm and travels in the circulation, lodging in the lungs.

Kawasaki Disease: An illness that causes inflammation in arteries, veins and capillaries. It also affects your lymph nodes and causes symptoms in your nose, mouth and throat. It’s the most common cause of heart disease in children.

Vaccine Enhanced Disease: When the disease that you have is worsened by the vaccine that is supposed to protect you.

They Know These Vaccines Are Dangerous!

Because these novel vaccines have not been sufficiently tested, and clearly are dangerous, the UK government’s Department of Health awarded a special contract to Genpact (UK) Ltd in September.

The procurement, of which that contract is the result, stated: “The MHRA urgently seeks an Artificial Intelligence (AI) software tool to process the expected high volume of Covid-19 vaccine Adverse Drug Reaction (ADRs) and ensure that no details from the ADRs’ reaction text are missed.”

Again, the UK’s Department of Health “expects a high volume” of adverse reaction reports coming from the public. They know that these vaccines are not safe and that tens of thousands of people, in the UK alone, will want to report these adverse reactions and perhaps demand compensations for their vaccine injuries. But it will be the governments that are going to be held accountable for this. Not the pharma companies, that’s specifically stated in all the contracts between governments and vaccine manufacturers that have been signed so far.

According to the New York Times at least 2 pharmaceutical companies, GlaxoSmithKline and Seqirus, produce COVID-19 vaccines that contain squalene as an adjuvant.

According to a New Scientist article from April 10, 1999 squalene was present in experimental vaccines that were apparently administered to “around 100,000 troops who served in the 1991 Gulf conflict with Iraq” and who subsequently “developed a mysterious illness involving memory loss, thyroid disorders, allergies, fatigue, rashes and persistent pain.”

Research cited by the New Scientist article strongly indicates that the above mentioned illness, also referred to as the Gulf War Syndrome (GWS), could be caused by “the body turning against its own, natural squalene” due to the presence of the foreign squalene adjuvant in the experimental vaccines.

The New Scientist article further states: “Vaccines have often come under suspicion as a cause of GWS. Gulf War soldiers were the first to be systematically vaccinated against anthrax and plague because Iraq was thought to have biological weapons. France was the only country not to vaccinate its troops, and only French veterans are free of GWS.”

In addition, the same article states that “GWS has also been blamed on exposure to chemicals in Iraq. But [Bob] Garry [a virologist at Tulane University in New Orleans] found squalene antibodies in six soldiers who were vaccinated but never went to the Gulf. The Gulf War Veterans Association, based in Versailles, Missouri, suspects that most cases of GWS were caused by experimental vaccines. [reminder, these COVID vaccines are experimental] If so, says the association’s Dave vonKleist, this would violate the Nuremberg Convention. ‘Military personnel are not subjects for experimentation,’ he says.”

According to an article by The Guardian from July 30, 2001 “the illness known as Gulf war syndrome looks likely to have been caused by an illegal vaccine ‘booster’ given by the [UK] Ministry of Defence to protect soldiers against biological weapons, according to the results of a new series of tests. Scientists in the United States found that symptoms of the illness were the same for service personnel who received the injections whether or not they served in the Gulf. The common factor for the 275,000 British and US veterans who are ill appears to be a substance called squalene, allegedly used in injections to add to their potency. Such an action would have been illegal. Squalene is not licensed for use on either side of the Atlantic because of potential side effects.“

The US Department of Veteran Affairs claims that the following illnesses are known long-term side effects associated with the GWS, and thus squalene (and some of these are not even listed yet by the above FDA report):

•”Myalgic Encephalomyelitis/Chronic Fatigue Syndrome (ME/CFS), a condition of long-term and severe fatigue that is not relieved by rest and is not directly caused by other conditions.

•Fibromyalgia, a condition characterized by widespread muscle pain. Other symptoms may include insomnia, morning stiffness, headache, and memory problems.

•Functional gastrointestinal disorders, a group of conditions marked by chronic or recurrent symptoms related to any part of the gastrointestinal tract. Functional condition refers to an abnormal function of an organ, without a structural alteration in the tissues. Examples include irritable bowel syndrome (IBS), functional dyspepsia, and functional abdominal pain syndrome.

•Undiagnosed illnesses with symptoms that may include but are not limited to: abnormal weight loss, fatigue, cardiovascular disease, muscle and joint pain, headache, menstrual disorders, neurological and psychological problems, skin conditions, respiratory disorders, and sleep disturbances.”

Vaccine Safety and the WHO

Let us also remind you of the fact that the World Health Organization itself has admitted in 2019, during a closed-door meeting, see video below, that vaccine safety in general is not properly being tested. In fact, there’s no gold standard at all to test vaccine safety, even after decades of manufacturing and administering vaccines all across the world.

Still want to get your COVID-19 shot? We at ERBN are going to pass, that’s for sure.

DO CONSIDER A DONATION, SO WE CAN REACH MORE PEOPLE AND DO MORE INVESTIGATIONS. BECAUSE OF THE CONTENT ON OUR WEBSITE, ERBN IS NOT ABLE TO HAVE PAYPAL OR OTHER SUCH ACCOUNTS. FOR DONATIONS WITH WESTERN UNION OR XOOM CONTACT US VIA EMAIL: CONTACT@ERBN.ONLINE. 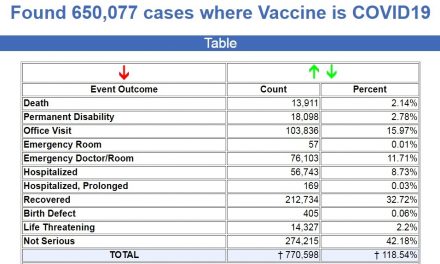 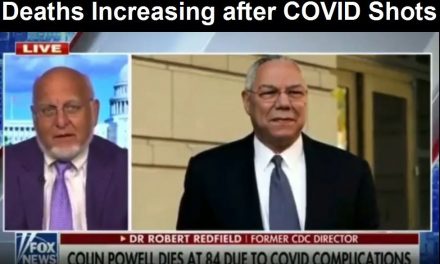