(The Best Years in Life) Many internet conspiracy or expose’ sites have quoted certain opinion leaders, wealthy, and well connected members of the international ruling class – the one or two percent, as favoring whatever depopulation strategy will work. This is an area most choose to not accept or confront, which only enables them more.

There are even numbers to reflect the elites’ desire to allow only around five to ten percent of the current population to exist in the future, allowing the ruling elites to have their way on their playground, planet earth. Why hinder exploiting resources with all that riffraff trying to get in the way of their “progress”.

Their quoted statements tag a desire to dramatically reduce the population to below one billion or ideally to one-half billion. Then it’s their neighborhood to unleash their unbridled greed and lust for control.

They only need few chipped humanoid slaves to perform the deeds for their needs, maybe some robots too. They don’t need you and me, especially if we disagree. There’s no telling if they’ll achieve their wet dream, but it appears they have established quite a head start.

The controlling elites have realized, although useful for destabilizing regions and gaining more control over resources and dwindling populations, wars are not effective depopulation and population control tools. Food and medicine are. The term often used to describe the elites’ depopulation effort is “slow kill”.

This allows for gradually increased control over the food chain and the populations they feed. Their pharmaceutical drug cartels can create even higher profits as the media influences enough programmed matrix junkies to seek more poisons for their cures.

The elites control both and they have a tight grip on the media. Since food is considered the first medicine by real doctors and healers, poisoning the food is a big first step toward creating slow kill, a process that creates disease and convinces the masses they need toxins to get healthy. That’s a money maker that finishes the job.

It’s not just killing, it also involves incapacitating as many as possible after birth with outrageous toxic vaccination schedules and making birth as close to extinct as possible by neutralizing both male and female fertility. This is the stuff of a futuristic dystopian sci-fi novel or movie.

Yet, this present moment in time on planet earth is demonstrating several destructive activities that make it obvious that’s the direction in which we are headed. Let’s look at one aspect, poisoning the food supply, with a massive epidemiological study collaborated on by three researchers from three separate USA locations.

Study: The High Cost of Pesticides: Human and Animal Diseases

This study, apparently mis-titled, unless herbicides were categorized as pesticides, was published in the open access journal Poultry, Fisheries & Wildlife Sciences in early 2015. Open access means you can read the whole study’s papers without a paying a fee or being a member of an academic group.

The crops analyzed by the study’s researchers were corn, soy, potato and wheat, while monitoring the herbicides used on them: Glyphosate; 2-4,D, dicamba; chlorothalonil;ETPC (S-Ethyl Dipropylthiocarbamate); atrazine; alachlor.

Only the active ingredients were considered within the context of this study. Potency boosting adjuvants and chemical surfactants that improve herbicide penetration of compounds through organic matter are hidden from view as “trade secrets”, but at least the types of adjuvants and surfactants are known that increase the overall toxicity into the environment, animals, and us.

One type of adjuvant/sufactant inhibits the glyphosate degradation in soil that Monsanto claims falsely with Roundup. The New York State Attorney General successfully sued Monsanto to remove that false claim and others in 1997. That means glyphosate hangs around in the soil to get absorbed by the plant crops that many eat, gets into waterways, and evaporates into the air more than most want to know.

This was evidenced by the Montana researcher who obtained postmortem reports of wildlife physiological deterioration and birth anomalies. The human reports were obtained mostly from hospital discharge records in the states reporting high PAT numbers.

Long story short, the matches of corresponding increased disease rates and birth defects among animals and humans corresponds very well with the rapid and dramatic increases of pesticide use. Many of the pesticides increased due to weeds developing glyphosate resistance while glyphosate use increased even more with the newly discovered treatment of desiccating pre-harvest non-GMO grains, especially wheat.

If you want more details, there are plenty of them in the long story from the study, available here with lots of graphs and figures. Please have at it if you are up to it. The abstract will give you a clear summary of that longer story here.

From the abstract you can access a full table of graphs and figures. You can click each of them to make them larger. And all 110 references for this study are listed with a click from the abstract page also, except the one from reference #2, Monsanto B (2012) “Preharvest Staging Guide”, translation: arranging the wheat field for dessication. Now it has been removed from that link. Very suspicious.

Monsanto and their poison product cohorts are getting their way with poisoning the food supply and lying about GMOs, pesticides, and herbicides such as Roundup. The USDA, EPA, and FDA are complicit with their criminality by protecting those toxic industries instead of safeguarding plant, animal, and human life. The media simply clouds the issue as ideological instead of survival, keeping the masses confused, ignorant, and fighting with each other, as usual.

Paul Fassa started looking into natural health to overcome his unhealthy lifestyle. Then he developed more interest as he researched his articles for Natural News and Align Life.

He is amazed at the ignorance of natural medicine and how beneficial foods and herbs are constantly ignored or vilified in order to promote toxic foods and meds by Big Pharma, the FDA, USDA, and the AMA, what he likes to call the “Medical Mafia”.

His blog is http://healthmaven.blogspot.com/ – “Healthmaven: Escape from the Medical Mafia Matrix.” His Natural News articles can be reviewed here: http://www.naturalnews.com/Author712.html 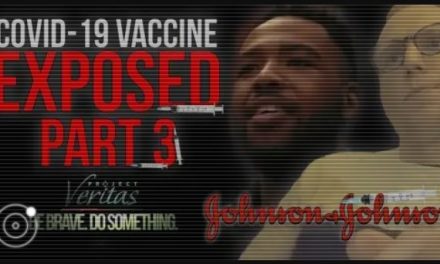 Johnson and Johnson Employees Admit They Would not Take the COVID-19 Shot Their Employer Makes, nor Give it to Children

🇨🇦CANADIAN POLICE 🇨🇦 ENCOURAGES TO HOLD THE LINE (SUPPORTS US)